I have been wanting to make cinnamon rolls ever since the last time I made them back in January. Since my parents have been visiting us from my hometown of Columbus, Ohio for about two weeks now, it just seemed like the perfect time to whip up a batch! It is always nice to share a batch of cinnamon rolls with others, otherwise, I can’t be trusted around them! 😉 The other day while my mom and I were at the local farmers market, I spotted these amazing blueberries just begging me to buy them. At the time I bought them I didn’t know what their fate would be. Maybe thrown into some muffins, perhaps a loaf, or even some scrumptious pancakes. Ultimately, blueberry cinnamon rolls won and I found myself searching for the perfect recipe. I altered my Sensational Cinnamon Roll recipe to include an incredible blueberry filling that I found over on The Beantown Baker’s wonderful foodblog. Warm ooey, gooey, melt-in-your-mouth cinnamon rolls stuffed with plump blueberries and topped with rich cream cheese frosting. Let me tell you, these babies are worth every last calorie! Don’t let the rise time stop you from making these cinnamon rolls. They can be made ahead of time and placed in the refrigerator to rise overnight. When you are ready to bake, just pop them into the preheated oven and bake! Get ready for some tender, gooey, and shamelessly large cinnamon rolls. Come on, you deserve it! 😀

One year Ago: Raspberry Lemon Loaf

For the Cinnamon Rolls: 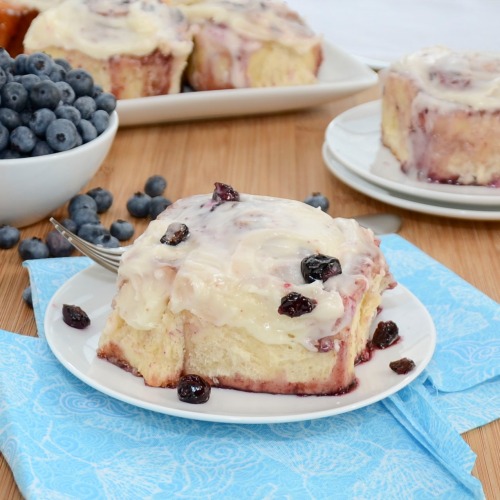