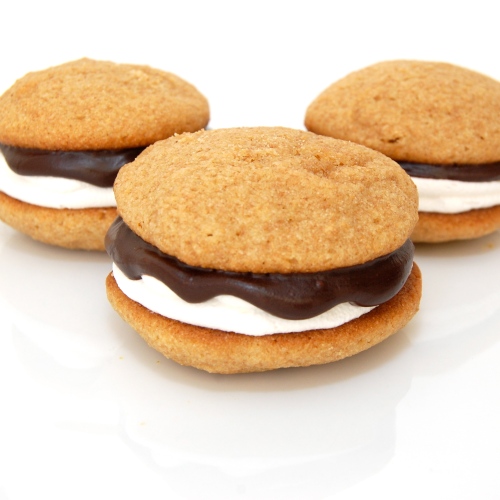 Happy 235th birthday America! Today Americans all across the nation are celebrating freedom and independence with barbecues, picnics, and family gatherings. Since Andrew and I just moved to a new city and have not met many people yet, it will be a low key 4th of July for us. I did venture out to the grocery store to pick up some 4th of July barbecue essentials! That is definitely a priority, right? 😉  Independence day wouldn’t be the same without some fireworks, so I was excited to find out that Peoria has one of the biggest fireworks displays in the entire state of Illinois tonight downtown on the riverfront! As I was thinking about a dessert to make for the 4th, I thought what better way to celebrate America’s birthday then with these S’mores Whoopie Pies?! I mean s’mores
are THE summer dessert and who can resist a whoopie pie? 😀

For the Graham Cracker Whoopie:

For the Marshmallow Filling:

For the Chocolate Ganache Filling:

Love Whoopie Pies as much as I do? 😀 Check out some of these delicious combinations!